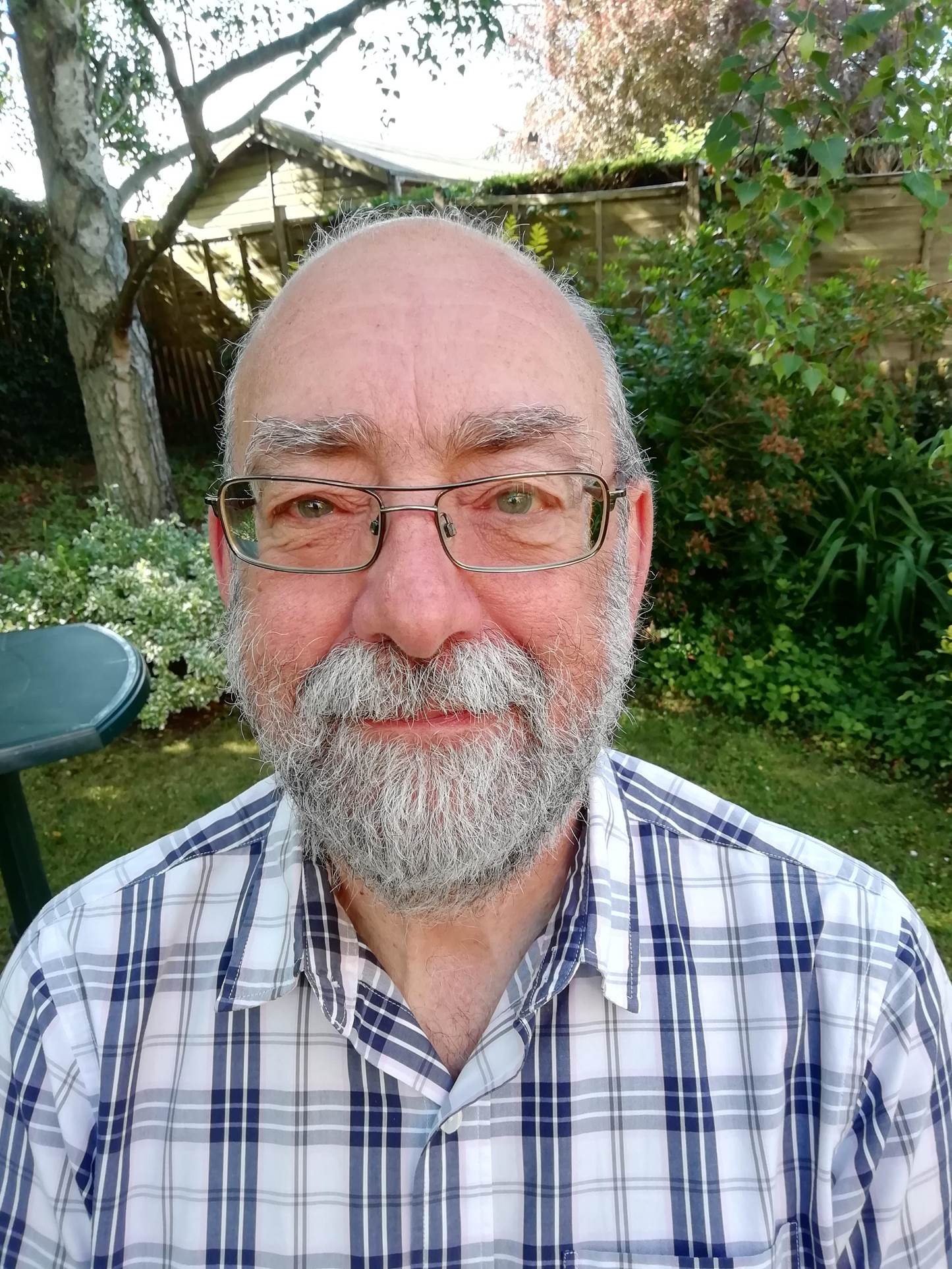 David originally moved to Kent in 1973 as a post-graduate researcher at Wye College.  He married Corinne in 1974 and after living in various rented properties around Wye, moved to Smeeth in 1977 where subsequently both their children were born.  He joined Ashford Borough Council in 1978, qualified as an Environmental Health Officer in 1982, and moved to Kennington in 1983.  However, as Kennington became busier, a return to village life called, and in 1989 the Herrick family, moved to Mountbatten Way, where David and Corinne have lived ever since.

David says – “I cannot recall exactly how I came to join Smeeth Parish Council.  I think one of the then Councillors told me there was a vacancy and suggested I went along to one of their meetings to see what was what – which I did.  I liked what I saw and in 2008 I duly became a Councillor under the Chairmanship of the late Gordon Fortescue.  I really felt that in giving help, support, and guidance to local residents through the Parish Council was so worthwhile I couldn’t turn down the opportunity to be part of that process.”

David retired from Ashford Borough Council in 2009 after 31 years of service and was thus able to devote more of his time to Parish Council matters and became Chairman in 2013 after the untimely death of the then Chairman, Stuart Austen, a post which David still holds.

Finally, David says -“The roles of the Parish Council are manyfold but the most important, in my opinion, is that of representing the views of local people and ensuring that as far as is possible, local community interests are taken into account when other organisations are making decisions.  The Parish Council is the voice of the people.”

Jackie came to Kent in 1981 and moved to Brabourne nine years ago. When a vacancy arose on Smeeth Parish Council she was invited by one of the Councillors to consider joining. She found this idea daunting but after going along to several meetings to see what was involved, she welcomed an opportunity to become part of a team providing a service for the community. Jackie has now been a councillor for about five years.

Jackie is strongly aware that the job of the Parish Council is to represent the interests of the whole community and feels that the diversity of local councils is their strength. Each councillor has his or her own contribution to make based on their own experience, knowledge and strengths and it is these qualities that permit the Parish Council to be perhaps more sensitive to the needs of the community than the larger authorities. She says: “Understanding the needs of different groups in the community (such as young and elderly people) is an important part of the role of a councillor. Occasionally a conflict of interest may arise between different groups which requires sensitive judgement. Making difficult decisions in an open and reasoned way is something that local councils need to do well.”

Smeeth Parish Council led the formation of the Smeeth Cluster Village Caretaker Scheme, a Joint Community Project responsible for financing and employing a full time Village Caretaker (see article above) who undertakes tasks in the villages of Smeeth, Brabourne, Brook and Mersham previously done by Ashford Borough Council and Kent County Council, the day to day running of which falls to the Smeeth Parish Clerk.

Jackie says: “The introduction of the role of Village Caretaker has been very successful and all four villages involved have greatly benefited by the provision of an ‘in house’ village infrastructure and environmental maintenance to a high standard.”

Villy has been a resident of Brabourne and Smeeth for the past 35 years and even before living here she was a frequent visitor to the village, where The Plough was a favourite gathering place for her and her friends. Having grown up as a Dutch national with cosmopolitan parents who travelled all over the world, she now considers herself Anglo-Dutch European. “Our stay in Mountbatten Way was meant to last only a couple of years”, she says, “but the village made us so comfortable, we just never left.” Although she eventually moved house, she made sure to stay within walking distance of the heart of the village and the countryside that she had grown to love.

When asked to join Smeeth Parish Council in 2013, she was flattered but also not sure what this would entail. “I was completely naïve about local government. I felt sure that I was only asked because they could not think of anyone else, so I accepted, not wishing to let anyone down.” She says she spent the first year or so just listening, reading and asking question after question, learning. “It was great to feel part of a very positive team, with everyone bringing their own experience and expertise to the table. Although we don’t always agree on everything, we all know that we want to achieve what is best for the parish and its people.”

Villy considers planning considerations to be an important and integral part of the role of a Parish Councillor, as their impact is often more direct and far-reaching than some of the seemingly smaller issues that the Council gets involved with. But she is equally aware that often those issues that seem small to some are enormously important to those who are directly affected. She says: “And that is how I see our role: to represent the village as a whole and help it to remain a great place for people to live, work and play.“

Hilary grew up in Elham surrounded by numerous siblings and her grandfather’s steam engines. She says she often has to remind her husband that this is clearly the reason she has difficulty parking her car, being used to driving something a little larger! She has wonderful memories of village life in the 1960s and appreciates the virtues of living in an active parish. Hilary moved to Kennington when she married John in 1977 and was delighted to return to village life when they moved to Brabourne Lees in 1994 and Smeeth in 2001.

She joined Smeeth Parish Council in September 2016. When asked why she joined she replied “I was coerced”. They chuckled and replied “No, you mean co-opted.” “No definitely coerced – by a friend over a glass of wine.” Looking back, she is very glad she agreed.

Hilary works for KCC but considers herself to be only a small cog within a very efficiently run Parish Council. Before joining the PC she says she took village life for granted and (rather ashamedly), hadn’t appreciated all the efforts made by the many village groups and volunteers. Hilary says it is inspiring to her to see how the commitment, time and energy of fellow Councillors and parishioners sustains strong community links and support services for those who reside in our parish.

Hilary considers that it is important that the PC reflects the voice of parishioners and safeguards Smeeth and Brabourne as one community by protecting our village boundaries and managing carefully proposed housing developments whilst ensuring we retain the heart of our village and community.

My life in the village started with a move to Knatchbull Way in 1981 and we have lived in Pound Lane since 1988. Our daughter went to Brabourne School.

I joined Smeeth Parish Council as a co-opted members in April 2019. My mother was a Parish Councillor in the Kent village I grew up in, so when I was approached it seemed to be the natural thing to do.

My first year was a learning curve, sitting, listening and a lot of reading. No one told me in the beginning about the emails and the information trail! One year in and just getting confident, then the pandemic swept in and Zoom became the new meeting room……….my learning curve is still ongoing!

It’s not just the bimonthly meetings. It’s not just about voting with a raise of hands and being able to pass an opinion. It’s also about being approachable and listening to those villagers that chat and raise concerns. Those villagers are the people the Parish Council represents.

Both the Parish Councils do an excellent job. Between them I think the Village Caretaker scheme is a brilliant example of getting things right. I would just love to see more people come to the meetings though. It’s not all about planning and dog poo bags!

For any enquiries or to report an issue, get in touch today. Learn more

Brabourne and Smeeth Parish Councils have launched a joint online e-Newsletter. We provide information on planning, meetings, village developments, any Parish Council business and interests and more. Please sign up to make sure you receive yours!

This site uses cookies. By continuing to browse the site, you are agreeing to our use of cookies.

We may request cookies to be set on your device. We use cookies to let us know when you visit our websites, how you interact with us, to enrich your user experience, and to customize your relationship with our website.

Click on the different category headings to find out more. You can also change some of your preferences. Note that blocking some types of cookies may impact your experience on our websites and the services we are able to offer.

These cookies are strictly necessary to provide you with services available through our website and to use some of its features.

Because these cookies are strictly necessary to deliver the website, refuseing them will have impact how our site functions. You always can block or delete cookies by changing your browser settings and force blocking all cookies on this website. But this will always prompt you to accept/refuse cookies when revisiting our site.

We fully respect if you want to refuse cookies but to avoid asking you again and again kindly allow us to store a cookie for that. You are free to opt out any time or opt in for other cookies to get a better experience. If you refuse cookies we will remove all set cookies in our domain.

We provide you with a list of stored cookies on your computer in our domain so you can check what we stored. Due to security reasons we are not able to show or modify cookies from other domains. You can check these in your browser security settings.

We also use different external services like Google Webfonts, Google Maps, and external Video providers. Since these providers may collect personal data like your IP address we allow you to block them here. Please be aware that this might heavily reduce the functionality and appearance of our site. Changes will take effect once you reload the page.